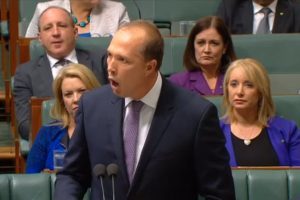 Immigration Minister Peter Dutton described the plan as one of the government’s strongest moves, building on the success of its border protection policies over the past three years and that it sent a clear message that Australia was not an option.

The Migration Act will be amended to ensure that asylum seekers who try to come to Australia by boat are forbidden from the country for life. The amendment will prevent boat arrivals from making a valid application for an Australian visa, including those found to be genuine refugees under the 1951 Refugee Convention.

More than 51,000 asylum seekers arrived in Australian waters by boat during the six years from 2007 until 2013. More than 20,000 arrived in 2013.
No boat smuggling operation has succeeded in delivering asylum seekers to Australia since July 2014. But human rights groups have accused Australia of abrogating its responsibilities to refugees as a signatory to the United Nations Refugee Convention.

There are already thousands of people in Australia who are already residing here rebuilding their lives in our communities who will be affected by this new ruling.

Immigration Minister Peter Dutton said asylum seeker children would be exempt from the visa ban and he would have discretion to make exceptions for adults in cases where to do so was in the public interest.

Further, under the new legislation to be introduced to Parliament next week, thousands of asylum seekers who have returned to their homelands in the Middle East, Africa and Asia would be banned for life from ever traveling to Australia as tourists, to do business or as an Australian’s spouse.